_
Chelsey Clammer: Let’s start out with those two very introductory questions—the ones that seem general but they’re the ones that writers love knowing about each other—“How long have you been writing?” and “How did you get started?”

Oliver de la Paz: I've got two answers—I've been truly writing creatively since the 6th grade. I went to a Catholic elementary school and we had a somewhat dreary curriculum, but one day we had a creative writing unit. I wrote a terrible story about the Three Blind Mice. I had named them after parts of the eye. One was predictably named "Iris." Another was (unpredictably) named "Sclera." The last one was "Rod." I threw myself into the story because the nun who was my teacher was dumbfounded at the fact that an Asian kid was terrible at math and she let me and my family know it.

My second answer—I started taking writing seriously when I was in my undergraduate years at Loyola Marymount University. I was a Biology major but prior to college I had been secretly keeping a journal of poems and other scribbles. I had taken an elective course in poetry and was recommended by that teacher to take courses from Professor Gail Wronsky. She encouraged me strongly to continue writing and even allowed me to enroll in a graduate seminar. There were a few now-published authors in that seminar—Joseph Legaspi, Kristen Tracy, Ian Randall Wilson . . . it was rather intimidating, but I learned a heck of a lot.

CC: Your latest book, Post Subject, is a collection of prose poems. While I know this subject has been discussed and debated by writers almost ad nauseam, I'm interested in what you consider prose poetry to be. 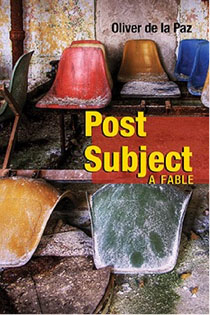 OP: I consider it to be a very flexible structure that evokes an immediate set of understandings and principles from a reader. The initial expectation of words that run from the left margin to the right margin is informational, but when the sentences are syntactically musical, then there's a disruption—a challenge to a reader's first understanding. Of course this is all dependent upon the author's intention. In the case of Post Subject, I wanted the language to sound informational, but then I wanted that idea of prose to collapse as more and more of the prose poems accrued.

CC: What are some of your favorite aspects of writing? What do you find frustrating about it?

OP: I love how it feels like stopping time. I also love how writing most often requires me to be responding to something I've read, seen, or felt. The feeling of stopping time and yet being able to relive past experiences—Tess Gallagher wrote a great essay on the poem as a time machine and I totally agree with her! Right now, especially, with young children, it's a way for me to get those moments back as well as a way for me to go back and figure out how I got here and who I'll be moving forward.

CC: In your poem “Self-Portrait as the Burning Plains of Eastern Oregon,” you write:

For me, this is an amazing example of how imagery can evoke a sort of tone. In other words, the imagery you use in these lines, such as “those charred, moonish surfaces,” in particular, sets a sort of tone of both wonder and longing, of remembering and reconciling. When you write a poem, do you begin writing for a certain sound, or are you usually inspired by a particular image or thought? Or none of these things?

OP: I basically start with a phrase that I worry over in my head and in my mouth like a stone for a few weeks. Then I put it down on the page. After that, I figure out what would go next, shaping the poem line by line. And as I get a sense of a narrative developing from the sounds of the lines, I'll then try to shape the poem in some narrative direction. That's definitely true for "Self-Portrait as the Burning Plains of Eastern Oregon." It started out with an image tied to the phrase "curlicues of smoke . . ." which I then surrounded with other lines. I had carried that phrase in my head for a while before committing it to paper.

OP: I have always listened to music while writing. I tend to listen to music that doesn't have lyrics—droning stuff that I treat as ambient noise. I use it to filter the outside distractions. My soundtrack for Furious Lullaby was “Music for Egon Schiele” by Rachel's, which is a quartet that creates neo-classical music. I also listened to a lot of Boris, which is a Japanese punk rock band. Weird combo, I know, but it's music that, as I mentioned, drones a bit and gets me into a meditative state. For Requiem for the Orchard, I listened to a lot of Explosions in the Sky and Balmorhea. Again, droning, guitar-centered music that felt quite spacious and open. I think, often, the music helps me settle on the tone of a work. I'll shuffle through songs and styles until I find something that syncs with what I'm working on, then I'll continue to play it. I wear Bose Noise Cancelling Headphones and wrap myself up into a sonic cocoon.

CC: You also teach in the MFA program at Western Washington University. How long have you lived in the Pacific Northwest? What are some of your favorite parts of living in the area?

OP: I've lived here since 2005. I love our proximity to two great cities—Vancouver and Seattle. I also love Open Books, Elliott Bay Book Company, and Village Books. Half my salary goes to these stores. There's also a wonderful music scene and living in Bellingham, we often get really great bands passing through as they go from Vancouver down to Seattle. I love being close to the mountains (which my wife loves) and the ocean (which I love). And I enjoy taking my kids to the various museums and all the fun attractions up and down this part of the I-5 corridor.

CC: In “Self-Portrait with a Spillway,” you write:

The water drags and drags, the current, a lie
repeating itself. I wish to be lied to. To feel the spray on my face.

I actually don’t have a question here. I just wanted to point out how gorgeous those lines are.

OP: Thanks. There's a spillway near the Owyhee Dam reservoir that I used to visit when I was a kid. We'd throw rocks, sticks, all kinds of stuff down into that whirlpool. And we'd always wonder where that stuff would end up, but never had the answers. You know that idea about black holes and how, if you were to be sucked down one you'd end up in another dimension? I think I had imagined that getting sucked down one of those things would be another chance at life. Like you get a free spin on a wheel.

CC: If you could ask every RWW participant and alum one question, what would it be?

CC: What are you working on now?

OP: I've got two projects that are on the burner right now—a prose poem manuscript which is looking more and more like an episodic novella. It's tentatively entitled In the Curl of the Labyrinth. It's loosely based on the Theseus and the Minotaur myth, but it seems more and more like it's about fathers and sons. And I've got a poetry manuscript I'm probably 3/4 of the way through entitled Revenant which is about cameras, ways of seeing, and ways that the spirit of a moment can no longer rest.

CC: Is there anything else you would like the RWW community to know about you and your work?

OP: I think my biological background granted me an organizational mind. I like patterns and pattern-making and much of my strengths as a reader comes from my tendencies to discern these things in language.

I consider myself a gamer—I own a PS4 and I do play video games to unwind. I favor Role Playing Games, which sort of makes sense for a writer. I'm actually looking forward to my kids getting a little older so I can get four controllers and we can all play together.

I'm the father of three sons, all under the age of seven. They're avid swimmers and bicyclists, and we take every opportunity to do these things.

Oliver de la Paz is the author of four collections of poetry, Names Above Houses, Furious Lullaby (SIU Press 2001, 2007), and Requiem for the Orchard (U. of Akron Press 2010), winner of the Akron Prize for poetry chosen by Martìn Espada, and Post Subject: A Fable (U. of Akron Press 2014).  He is the co-editor with Stacey Lynn Brown of A Face to Meet the Faces: An Anthology of Contemporary Persona Poetry (U. of Akron Press 2012). He co-chairs the advisory board of Kundiman, a not-for-profit organization dedicated to the promotion of Asian American Poetry and serves on the Association of Writers and Writing Programs Board.  A recipient of a NYFA Fellowship Award and a GAP Grant from Artist Trust, his work has appeared in journals like Virginia Quarterly Review, North American Review, Tin House, Chattahoochee Review, and in anthologies such as Asian American Poetry:  The Next Generation. He is the music editor for At Length Magazine and he teaches in the MFA program at Western Washington University.