As a former foster kid and at-risk teen, sometimes I found poetry was my only beacon of hope. Writing poems in my notebook was a way to clearly hear my own solid and sacred voice above the fray of my fractured family and their in-fighting. Early on in my participation in the Rainier Writing Workshop MFA program, I knew I wanted to build an Outside Experience project that was meaningful to my personal interest in poetry as a healing art.  I wanted it to incorporate outreaching at-risk teenagers—those youth whom I believe carry around a fairly well-formed self-narrative of being damaged. I believed they could benefit most from the healing practice of writing poetry. I know, as a teen, I did.

I had also been considering writing my critical paper on the topic of ”the damaged self” by looking at contemporary poets who were writing about childhood sexual abuse. I knew I wanted to further explore this kind of survival poetry, and my OE did just that.

In October, following my second summer residency at RWW, I partnered with The Arts Center in Corvallis, Oregon. The Arts Center is a community nonprofit that offers arts classes and writing workshops to adults, children and teenagers in Benton County. Additionally, they facilitate arts classes led by teaching artists, photographers and poets that access incarcerated juvenile delinquents in the area. I knew they could help me reach at-risk teens through their reputable and successful youth arts programs. Once they approved my workshop proposal and teaching artist credentials, they agreed to “sponsor me.” The Arts Center connected me with a local nonprofit homeless youth center1 that provides housing, meals and day-to-day care-taking of homeless youth in Corvallis.

Before my workshop began, I was made aware that the youth attending my classes came from living on the streets, and most all of them had personal backgrounds and home lives affected by poverty, divorce, death, drugs, foster care,  sexual/physical/verbal abuse, juvenile delinquency, nutritional/dietary deficits, and academic challenges and/or learning disabilities.

I showed up to teach on the first day and asked if anyone had ever written a poem. To my surprise, not only had they all written poetry, but each student arrived to class with poems they had already written, so I let each of them read one aloud. I was very inspired to accept this offering of theirs and recognize these challenged, injured youth who have been writing poems all along without a workshop to inspire them. Already, poetry had become a source of creativity, catharsis, and comfort for them all. 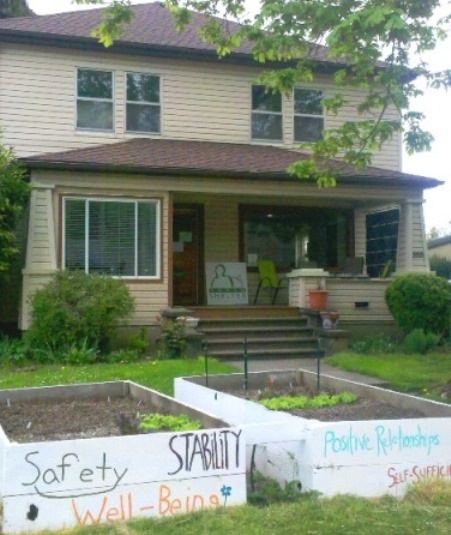 From March to April, I instructed the two-hour long workshop once a week. I created poetry packets for each class that presented a wide array of poets and voices speaking on weekly poetic themes of family, love, loss, grief, poverty and hope. From traditional to avant-garde, free verse to formal verse, warm and fuzzy to angry and uncomfortable, the poems showcased a diverse spectrum of styles, viewpoints and speakers.

On the day we analyzed poems about the theme of family, I chose a unique grouping of writings for the packet. We read “Mother’s Day” by David Young, “My Mother Was No White Dove” by Reginald Shepard, “Those Winter Sundays” by Robert Hayden, and “Daddy” by Sylvia Plath. After we read and discussed each poem on a micro-level—analyzing details, form and language defining the poem’s parent—we then elevated the conversation to discuss some of the larger implications of the works and what they had to say about the theme of family in general. That prompted a rich and lively discussion about traditional and dysfunctional families. The discussion uncovered sadness and family secrets, too. Each teenager in the class intimated they had been sexually abused and some of them boldly wrote poems about those transgressions to share with our group.

Because these students had their own emotionally difficult and broken interpretations of family at such a young age, I thought it important to show them how different family and parents look through the eyes of each unique poet. For the second half of that class, I gave the students time to free write their own family poems. After several minutes of free writing, the students were welcomed to share their work by reading aloud in a round-robin fashion. In this class, as well as each one before and after it, there was no student who declined to read. All students participated in this portion, and I was often delighted and deeply moved by their honesty, imagery and mostly the forgiveness for their parents that rose up in their poems.

This was a first experience for me as a teacher. I felt charged with such a deep trust. The connection and intimacy of that room was palpable that day, as well as all the others. I will never forget our bond in solidarity.

This Outside Experience was not only meaningful for my own MFA research, but it wound up contributing inspiration for my creative thesis work as well. I did write a number of new poems based on experiences in the classroom with the youth. Also, this OE opportunity will be a great asset to me in my future pursuit of teaching and nonprofit work after graduation. My homeless teen poetry class OE project was extremely powerful and positive for me as a RWW student, teacher and poet.

Bio: Tammy Robacker won the 2016 Keystone Chapbook Prize for her manuscript, Cuttings. Her second poetry book, Villain Songs, is forthcoming with ELJ Publications in 2016. Tammy published her first collection of poetry, The Vicissitudes, in 2009 (Pearle Publications). Tammy’s poetry has appeared in Menacing Hedge, Chiron Review, VoiceCatcher, Duende, So to Speak, Crab Creek Review, WomenArts, and Up the Staircase Quarterly. Currently enrolled in the Rainier Writing Workshop MFA program in Creative Writing at Pacific Lutheran University, Tammy lives in Oregon. Connect with her at www.tammyrobacker.com.